Not long ago, it was on the news that artists under Big Hit Entertainment have moved to the new HYBE building located in Yongsan, Seoul. Many were impressed by the scale of the building and if you are curious to learn more about it, make sure to check out our previous article here.

Back on April 5, 3 members of TXT
held an interesting and hilarious V-Live with their fans, MOA.

Leader SooBin, YeonJun and Huening Kai had transformed into farmers by wearing straw hats and denim overalls, as if they were farmers! Don’t worry if you had missed out the live as you can watch the re-run below.

They began the V-Live with a special introduction, causing many MOA who were watching it to burst out laughing. Later, they explained what they were planning to do and it turns out that they were going to plant tomatoes.

Each of them took good care of the plants while shifting them to a larger pot. 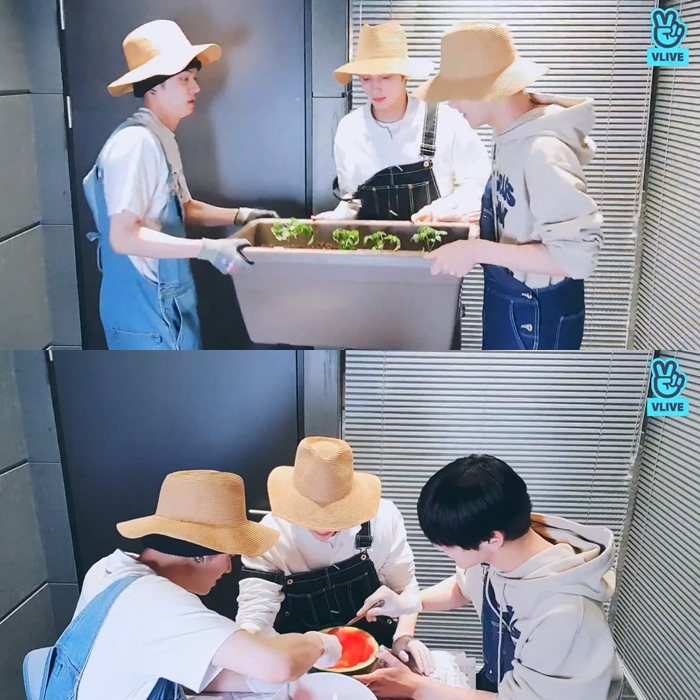 After completing their task, they decided to sit down and make a special dessert called ‘hwa-chae’. The boys spooned out the watermelon and put them in a big bowl before adding sweet treats, fruits, milk, ice and more!

Many commented that the boys looked like real farmers and enjoying a cooling dessert after ‘hard work’. Some also shared that they spent more time in perfecting the dessert rather than planting the tomatoes.

Overall, it looks like all the members had fun planting tomatoes and enjoying a refreshing snack while communicating with fans.

Do you find them adorable too?