NCTzens, the wait is finally over!

Available to all Free and Premium users, the Enhanced Album has been designed to be the ultimate audio and visual experience for NCTzens – bringing them closer to their bias than ever.

In addition to the 11 new tracks from NCT 127, NCTzens will be able to immerse themselves in intimate experiences with the band, via Spotify Clips – think exclusive, never-before-seen content, including special Virtual Reality Point of View (VR POV) dates.

Imagine waking Mark up from a nap after he’s dozed off in the middle of a tiring day. Or being greeted in the morning with a fresh cuppa and steaming scrambled eggs, courtesy of Jaehyun. How about Taeyong attempting to win the cuddliest soft toy in the claw machine just for you?

Spotify turns every NCTzen’s dream into reality with special VR boyfriend POV videos with each member accompanying listeners during their listening journey.

In the lead up to the Enhanced Album launch, NCTzens have also taken to Twitter to share their idea of a dream date with the band, in response to Spotify’s tweet – “Tell us what a perfect date with your bias looks like, and it might just come true! ”. 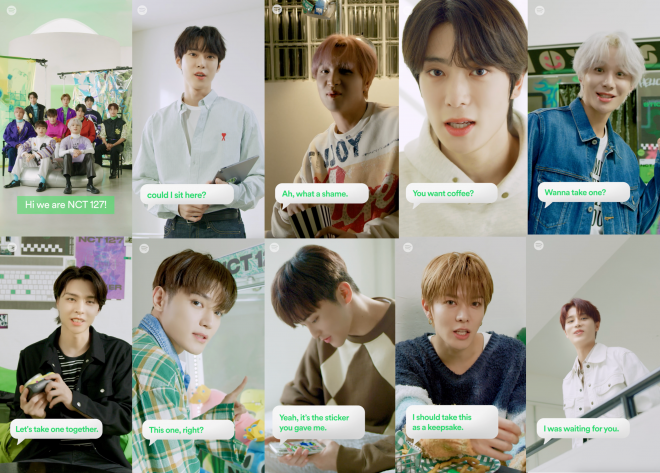 In addition to the VR boyfriend POV videos, listeners will also be able to learn more about the band’s creative process directly from NCT 127. In a series of videos, exclusively available on Spotify, the band takes a deep dive into their favourite songs to share insights that NCTzens won’t hear anywhere else.

From how someone becomes the center of your universe on Sticker, to the feeling of losing yourself in the eyes of the person you love on Focus, fans will be able to learn the meaning behind select songs, get advice from their favourite members and find out what their biases love about the tracks that they’ve poured their hearts into.

Spotify transformed music listening forever when we launched in 2008. Our mission is to unlock the potential of human creativity by giving a million creative artists the opportunity to live off their art and billions of fans the opportunity to enjoy and be inspired by these creators. Everything we do is driven by our love for music.

Discover, manage, and share over 70 million tracks, including more than 2.9 million podcast titles, for free, or upgrade to Spotify Premium to access exclusive features including improved sound quality and an on-demand, offline, and ad-free listening experience.

Today, we are the world’s most popular audio streaming subscription service with a community of more than 365 million users, including 165 million Spotify Premium subscribers, across 178 markets. We are also the largest driver of revenue to the music business today.