Bold And Fearless: 10 Things To Love About Hwasa

If we’re talking about K-pop stars who have it all — talent, charisma, and genuine personality — Hwasa has got to be one of the names on top. From the get-go, she has shown herself as a powerful force in music, dance, among other things, while keeping herself grounded and letting her true identity shine. In this perhaps slightly overdue appreciation post, here are just some of the reasons why Hwasa deserves all our love:

Hwasa is an integral part of MAMAMOO, and while members are often in charge of particular roles such as vocals, rap, or dance, she can practically do everything so well. But she is one who embraces teamwork, which can be seen in how she blends well with other members while making sure she brings her own flavor to the group. Her lively and sociable personality enables her to work with anyone, whether it’s a group of equally strong women (Refund Sisters), rapper-producers (Loco, DPR Live), a boy group (ONEWE), a senior in the K-pop industry (Park Jin Young, Uhm Jung Hwa), or even with an international star (Dua Lipa)! She always has great chemistry with MAMAMOO which results in magical perfect harmony, as well as achieving record-breaking hits with many others. It’s no wonder why everyone wants to work with Hwasa!

She shines as a solo artist

When she’s working solo, you can trust that Hwasa always delivers. She is part of every production process from writing lyrics, conceptualizing ideas, styling, down to the very last detail. Another thing that makes her solo comebacks more special is that she pours all her hard work into them. She tells The Korea Times in an interview about her single “Maria,” “It’s the ‘fruit’ of my sweat and tears. It is also brimming with the emotions I felt at 26. I have never devoted so much passion to anything else than this release ― I was truly obsessed with it and achingly loved it.” She works hard to achieve top results, but more than that, it’s primarily because she wants to put her best music forward to her fans. She adds, “I poured a lot of effort into the album. I hope my sincerity embedded in this work can be successfully delivered to my fans.” Her songs are catchy, hip, and oftentimes upbeat, and she emphasizes that her lyrics always have a deep meaning. “Just like my previous song ‘Twit,’ ‘Maria’ has a touch of sadness on top of an exciting beat,” Hwasa explains. “From an early age, I have always liked such songs because they seem to mirror people’s actual life.”

She has unique comeback concepts

Whether it’s through her stage outfit or music video imagery, Hwasa is never afraid of trying something new. No matter how experimental or strong her concept is, she always gives her own take on it and pulls them off with confidence. 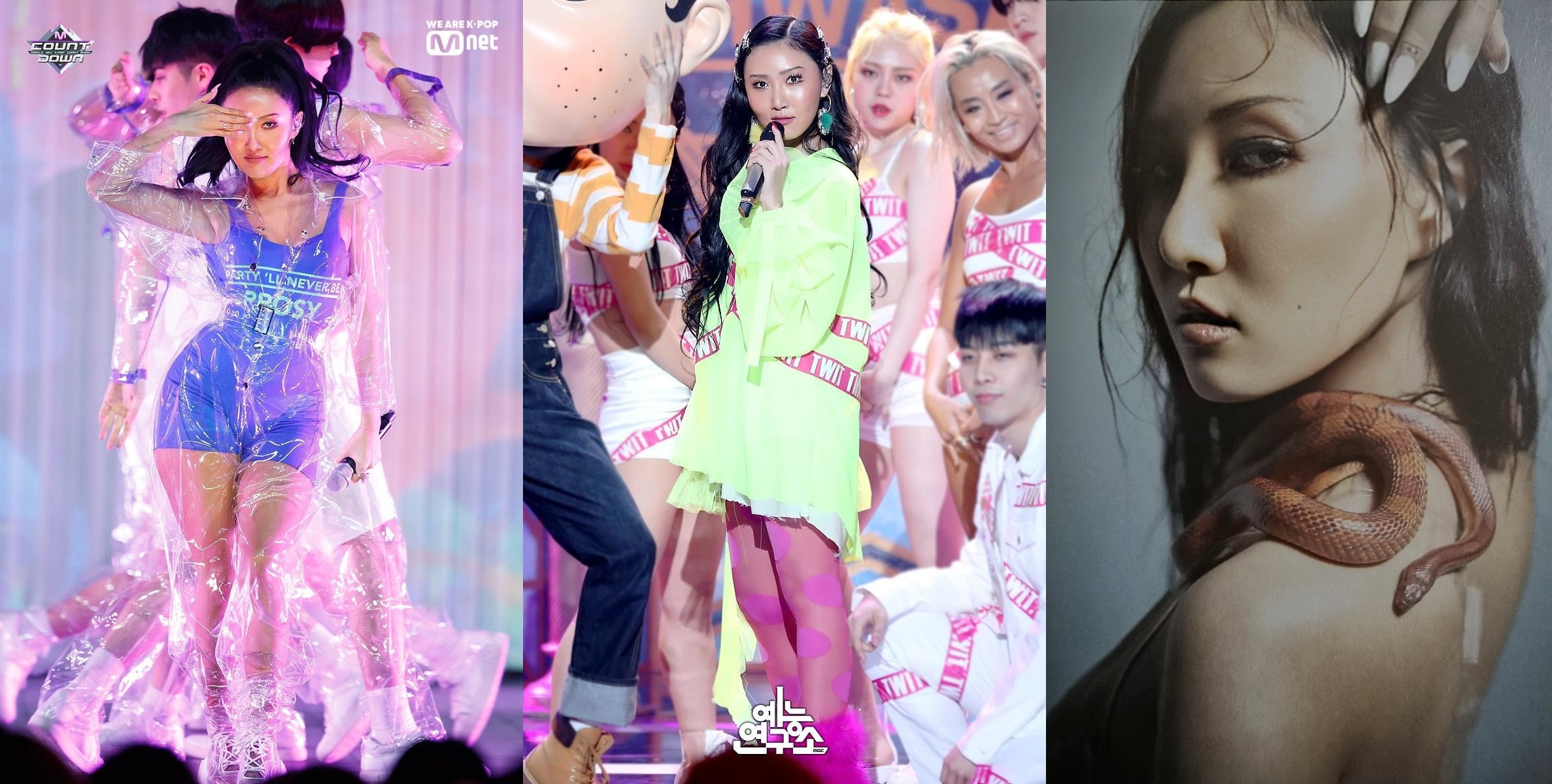 As for her music video concepts, her imagery and messages are often bold, unapologetically sexy, thought-provoking, and fearless. One Twitter user commented about one of her MVs, “TWIT is cute, upbeat, sad, emotional, and quirky. She has the RANGE for any genre because she’s born with pure talent.” 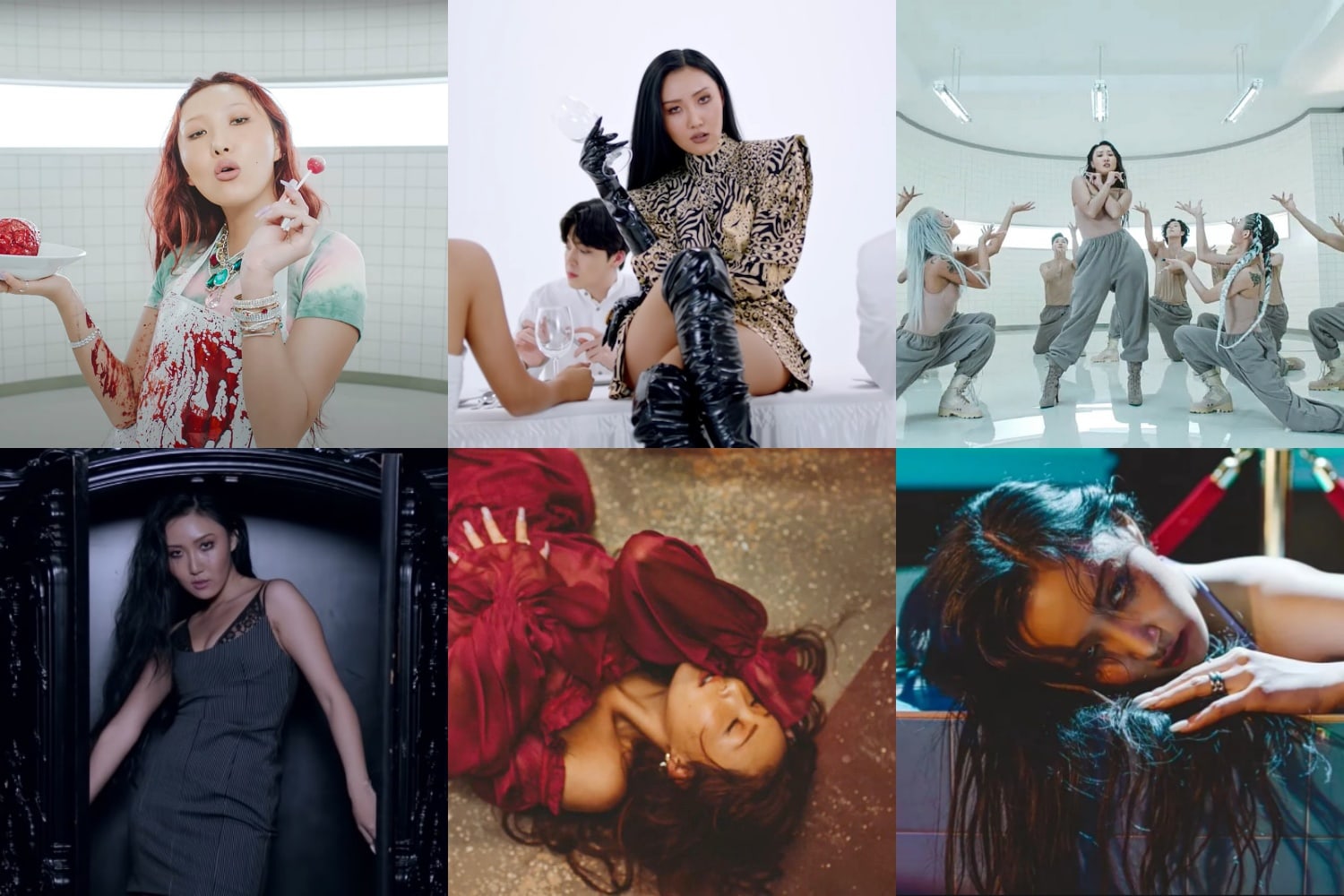 She lights up live stages on fire!

If you like Hwasa’s pre-recorded, planned, and choreographed performances on-screen, you will definitely love her live performances! Her strong vocal range that remains steady even while doing literally breathtaking dance moves and impromptu moments are guaranteed to wow audiences. Just as fearless as she is when it comes to her concepts, she is even braver onstage, with her powerful delivery, iconic, and energetic performances.

She makes a bold statement about women empowerment

As if her imagery isn’t enough proof of this, she’s often honest about her struggles, beliefs, and advocacies, and tells it like it is to fans. One time on stage, she told the story about an audition gone wrong, not because of her, but because of an instructor who told her, “You’re really unique and sing well. But you’re fat and not pretty.” But Hwasa didn’t let detractors make her give up on her dreams and decided to not fit in with other people’s strict beauty standards. In an interview, she says, “I love the line [in “Maria”] that reads, ‘Why do you keep struggling ― you are already beautiful. I think this part brings comfort and energy to the listeners.” 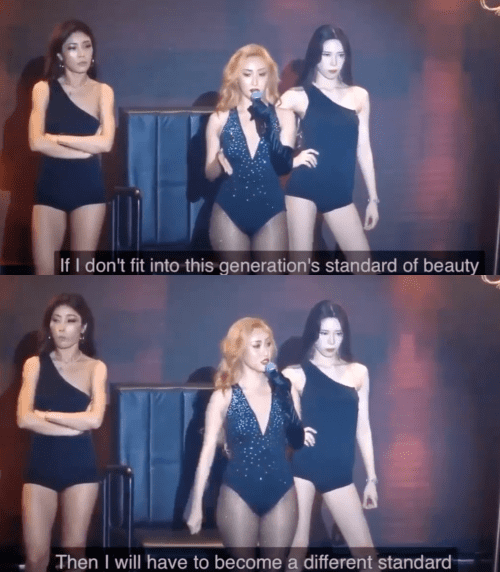 She remains unbothered by haters

If anyone follows the advice, “You do you,” it’s got to be Hwasa. Years ago she caused an uproar in Korean media when she appeared in casual pants and wearing a white T-shirt braless. Netizens and critics shamed her for this without knowing her reason. That day happened to be July 9th, which was the initial date that celebrates “No bra day,” a day when women are encouraged to go braless to share awareness about breast cancer awareness. But whether that’s just coincidence, Hwasa didn’t want to explain herself or her decisions to anyone (and rightfully so) and simply addressed the issue as, “I’m dressing comfortably.” She also doesn’t get bothered or feel the need to change whenever critics bash her for what they perceive as her “provocative” and “controversial” outfits.

Her every facial expression is a mood

We don’t really need to say more because her expressions do the talking! 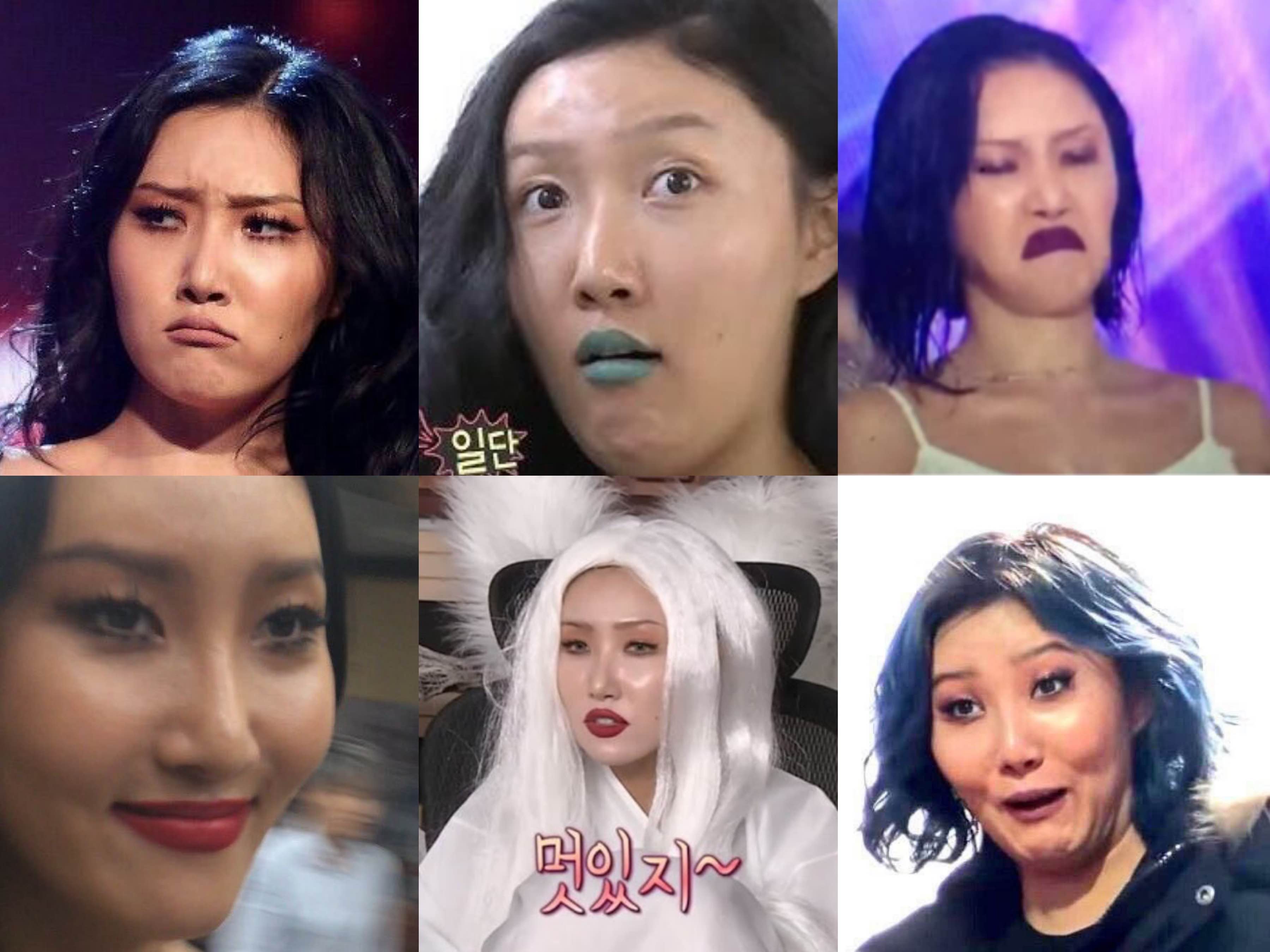 She is a best-selling “influencer”

Many fans can relate to her and admire her stereotype-breaking personality, so they’re often curious about what she eats, wears, uses, and want to buy them for their own! This is called the “Hwasa effect” by Korean media because she sells out everything that she touches. In the show “I Live Alone,” she was shown eating gopchang or pork intestines, and instantly, people started eating it as well as buying the gopchang brand she endorses after seeing the broadcast! Her outfits and accessories also become a trending topic online!

Despite all her success, she never forgets to look back on where she came from. She often makes time to visit her family in her hometown and drives all the way there for three to four hours. She is a dedicated and respectful daughter who remains humble. She is also vocal about her family’s struggles in the past. In an interview, she said, “My family was really poor, but my uncle helped me with my living expenses and everything while I lived in Seoul.”

She is as real as she gets!

Just as she is fearless about her outfits, she is also unapologetic about her no-makeup face and at-home image for all the world to see. In “I Live Alone,” she’s not afraid to make different facial expressions, be lazy, eat to her heart’s content, and just be a normal human being like everyone else! 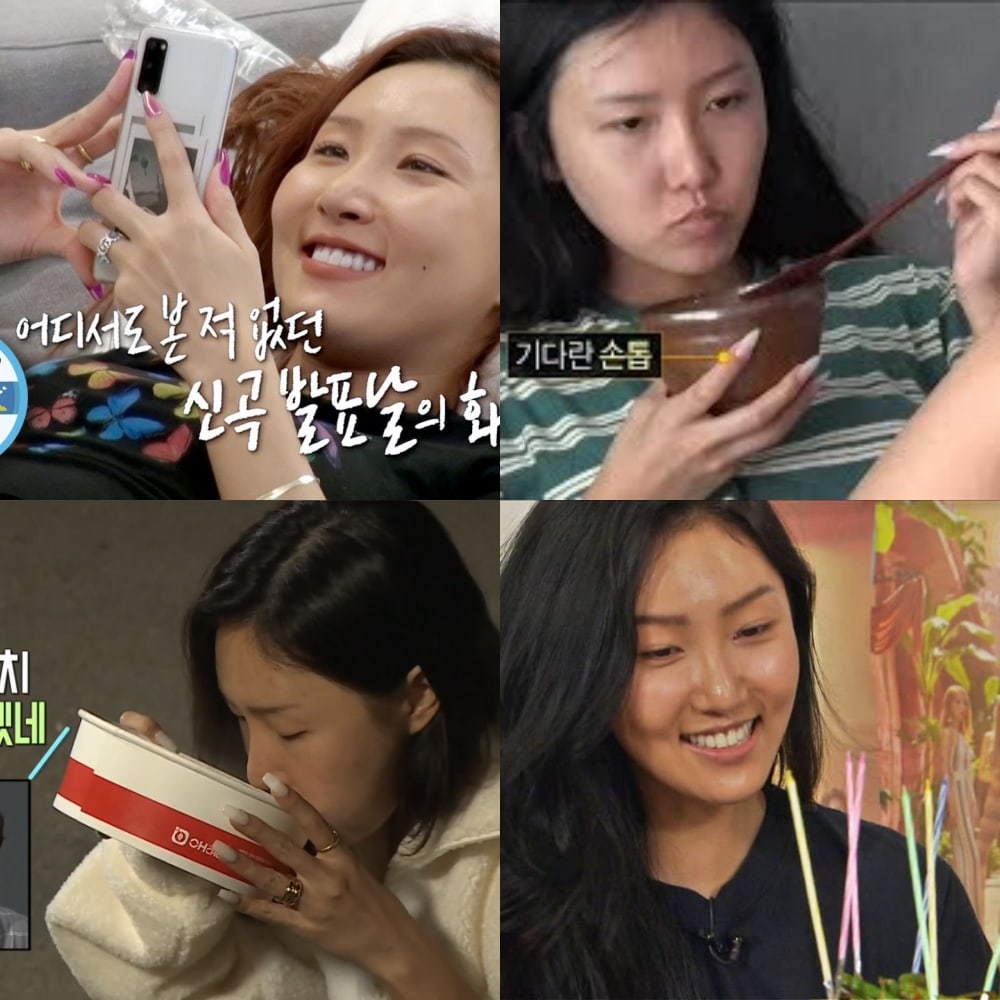 We stan a queen!

What other things do you like about Hwasa? Let us know in the comments below!

DianneP_Kim is an English magazine and online editor based in South Korea. She is the author of a K-pop style book published by Skyhorse Publications, New York, and has recently released her second book about BTS. Check it out on Amazon, follow her on Instagram @dianne_panda, and subscribe to her YouTube channel at iwonderkorea!